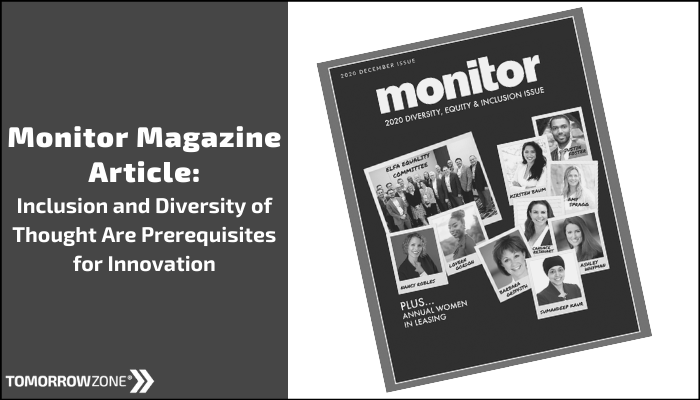 The stakes for innovation have never been higher and it will take diversity of thought to examine the wicked and complicated problems of today and create solutions for tomorrow. Recognizing uncomfortable truths like this is only the first step in a long journey ahead and understanding and embracing our differences and the collective value those differences bring is an important step.

Deborah Reuben was honored as a guest editor in a groundbreaking, first ever issue of Monitor Magazine focused on Diversity, Equity & Inclusion, in an article titled Inclusion and Diversity of Thought are Prerequisites for Innovation. 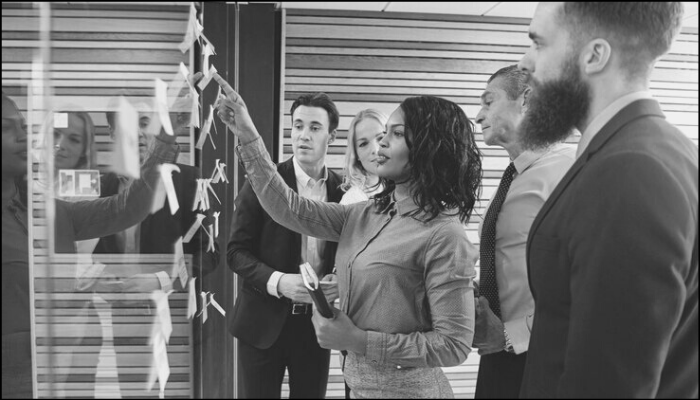 This article was originally published in the December 2020 Edition of the MonitorDaily Magazine. See the original article and more of Monitor’s work and how they’re supporting the equipment finance industry, visit MonitorDaily.com.

True innovation and disruption can only happen when a company’s decision makers have diversity of thought. Deborah Reuben interviews two DE&I leaders about how inclusion creates innovation and how leaders must be willing to fail forward and learn from mistakes on their company’s journey to creating a culture of inclusion and belonging.

From Head Start through college, David Edgerton Jr. grew up in a “comfortable environment” in which most of the people he encountered looked like him. “I grew up in an environment where I had full support to be who I am,” he says.

Over the years, Edgerton earned his electrical engineering degree and MBA, landed his first corporate role, became a manager and a leader, and began attending conferences and hackathons. As Edgerton climbed the ladder in the technology field, he saw fewer and fewer African American people in the room.

In 2014, the biggest tech companies in the world started publishing annual diversity reports. 1When Edgerton saw how few Black and Brown people were employed by giants like Facebook and Google, he decided that he had to do something about it.

At first, Edgerton acted as a representative, working with various community organizations to promote the technology field as a career path. He also worked to actively recruit people of color from historically Black colleges and universities. After several years of volunteering, Edgerton’s employer took notice and invited him to become its first director of diversity, equity and inclusion.

Jen Croneberger leads the HUMAN Leadership Institute, where she focuses on helping leaders at institutions like Vanguard, TD Bank, The Wharton School of Business and Deloitte learn how to compassionately lead using a methodology that puts the power of the human spirit at the center of every company’s success. She believes that when a company truly creates a culture of diversity, equity and inclusion, it will reap the benefits of diversity of thought.

“Every single person sees the world through different lenses,” Croneberger says. “The way we see the world is going to be different from the person next to us.”

Edgerton believes intentional thought diversity can foster greater innovation. “The stakes have never been higher for innovation than right now,” he says. “There are so many challenges that surround us today. And it’s going to take diversity of thought to come up with the solutions to those problems.”

To get there, Edgerton says a company must look at its leadership. “If you walk into a room where a decision is made and you look around the table and everybody has the same background, looks the same and is comfortable with each other, right there, you are limiting your potential,” he says. “If you want the best answer and the best solution, you’ve got to get multiple perspectives. You also must respect those perspectives once they show up.”

Edgerton warns that leaders who discount or disregard diverse perspectives are rejecting diversity and evolution.

“The companies that are winning today are disruptive,” Edgerton says. “And they’re disruptive because they’re choosing to do things differently. The best defense in the space of a business as a game is when you attack yourself.”

To truly find the holes in your business before a competitor does, Edgerton says diverse perspectives are a requirement. If leaders respect the people who bring those unique viewpoints, their company will gain a competitive edge by building an inclusive workplace. “People will be attracted to come to your space and bring their diverse thinking,” he says.

“Abandon the way you’ve done things,” Edgerton says. “Look at new ways of recruiting, retention, where you go look for talent, who the talent looks like, what they sound like.”

If leaders don’t know where to look for diverse talent, Edgerton says they must reach out for help. “The talent is out there,” he says. “You just have to be comfortable that the talent doesn’t look like or sound like you.”

Edgerton points out that many companies try to do the “right thing” when it comes to DE&I, but they don’t always know what that looks like.

The most important thing, to Croneberger, is how we show up every day. “It’s about how we build our confidence, how we recover after mistakes. We’re not always going to get it right, especially in the DE&I space…but we have to do it. And I will go a step further and say we get to do it,” Croneberger says.

Staying curious and teaching future generations to be curious is vital to ongoing DE&I progress, according to Croneberger, who says we must recognize the fact that each person sees the world through their own belief window.

Croneberger says it’s important to talk about intersectionality and to discover where our various perspectives meet.

Croneberger points out that the word “courage” comes from the Latin word “cor,” which means heart. “I look at courage as not being afraid to share your whole story with your whole heart,” Croneberger says. “Courage is about being authentic. All of these pieces that come together, it is at the core of every single one of us. Before we even talk about race and religion and sexual orientation and ability and all of those things, we have to look at the center. When we wipe all of that away, what is that commonality that we all share? We want to be seen, we want to feel listened to and we want to feel validated.

“We just have to make it human again,” Croneberger says. “Let’s talk about what that looks like and what that exchange feels like. And when we’re doing that right, we’re successful.”

A Future of Inclusion

Croneberger says it’s vital to remember that diversity, equity and inclusion are not one and the same: “Diversity is being invited into the room. Equity is having the same level of access to the room as everyone else. Inclusion is having a seat at the table. And belonging is having a voice that is heard and listened to by others who sit at that very table with you,” she says.

Simply checking boxes will never create a culture of diversity, equity and inclusion. “Yes, we have to have those conversations,” Croneberger says. “We have to get to that place where there’s diversity across the board. But if we don’t go beyond that, then we’re just checking boxes. If we don’t try to get to that place of belonging, where everyone at that table actually feels like they have a voice and they’re not afraid to use it, then we won’t ever get to the place we need to be.”

Edgerton points out that in about 15 years, the U.S. will have a non-white majority in its population. “If we do this right, we will see diverse leadership in every industry, representative of all the people that we have in the country at the proportion that we have them,” he says. “What I expect to see is a natural number or proportion of people represented in all areas, especially upper management and executive leadership positions.

“That’s how you know that people have truly embraced building an inclusive workplace: They understand the benefit of diversity, equity and inclusion,” Edgerton says. “From an innovation standpoint, I see companies really locking in and utilizing the full potential of their entire workplace.”

Edgerton notes that a company culture must be inclusive first. “Inclusion attracts diversity, not the other way around. People are failing at diversity initiatives now because they have not built the magnet, which is an inclusive workplace. If you know you can go somewhere and be all you can be, regardless of who you are, guess what you would do? You would go there and give it all you have because you know it’s valued,” Edgerton says. “So as companies start to build these inclusive workplaces, they’re building them [as an] engine to attract the diversity, the diversity of thought, the diversity of backgrounds, the diversity of any other dimension of diversity you want to use. They’re building the magnet for that, and the best talent wins.”